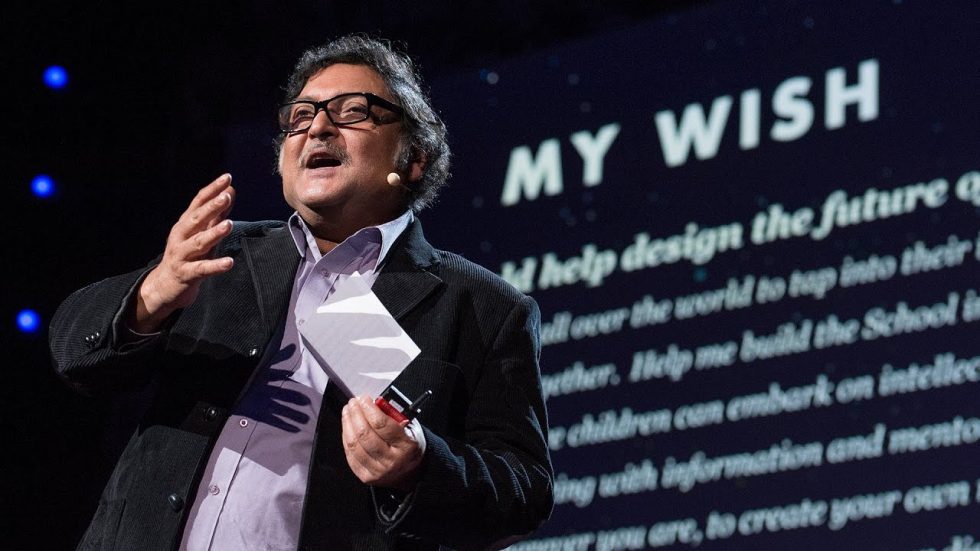 1) Sugata Mitri starts his TED talk with a question ‘What is going to be the future of learning?’

He immediately cues us that he is going to address this question practically with… ‘I do have a plan.’ But chooses to get there by way of a story… ‘In order for me to tell you what that plan is, I need to tell you a little story which kind of sets the stage.’

What is interesting is that it is a big picture story. It is designed to help us understand where learning and schools comes from. He draws us in through techniques that help us picture the British Empire 300 years ago, including: a slide of a map; asking us to ‘imagine trying to…’ then taking us through some of the administrative challenges; drawing a clear image…‘they created a global computer made up of people’.

2) The speaker tells a succession of short stories to then bring his practical project to life. He uses video clips, and adds to the context via narration. He tells us what actions some of the children took. He re-creates moments of dialogue. These elements all help us understand his research in human terms.

3) He also ends with a story, first placing us geographically, and with concrete details…‘One last thing. I’ll take you to the top of the Himalayas, at 12,000 feet, where the air is thin. I once built 2 hole in the wall computers, and the children flocked there.’

He lands on a beautifully descriptive moment, that encapsulates much of the theme of his work, when he asks one of the little girls there what he should do to be able to give a computer to every child. He both verbally describes, and re-enacts the moment when she lifts her hand up to him as he is taking a photograph of her…and then he provides an additional moment of specificity and delight when he shows the picture he captured of her doing just that.

We have her face in mind when he then adds in her spoken response. ‘Get on with it.’ This layering of details makes it an effective storytelling moment, that is resonant thematically, and that we can picture and will remember.